I can’t believe how fast 2014 went. It flew by so fast I’m now writing the New Year’s post I planned to write at the end of 2013.  Without further ado, here are my highlights and lowlights of 2014.

1. The year of the cat. This year I surprised myself by deciding to get a cat. I’ve always been a dog person – never really liked cats – and when I brought a kitten home I remembered all the things I didn’t like about cats. The way they scratch furniture for example. After two weeks I decided the kitten and I had to part company so I went to take it back. Instead I came home with two kittens. I’m now besotted with Charlie (and the Chocolate Factory) and Jamie (and the Giant Peach) and wonder how I’ve spent so much of my life thinking I didn’t like cats. 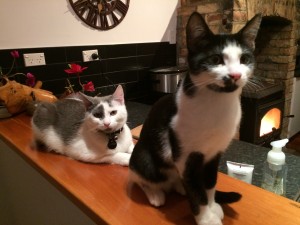 2. The year of the dog. Not content with my two kittens I got a new puppy, a beautiful Harlequin Great Dane. My older Dane Dolce loves her. First there was Dolce – now there’s Dolce and Gabbana.  Gabby’s a stunner, and she won ten ribbons in her last show.  Dolce is gorgeous too, and she won one ribbon for trying hard, which she’s wearing in this photo.  That’s the ribbon I’m most proud of. 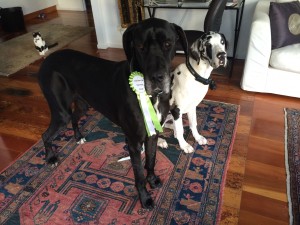 3. Giving up work. If I’d thought carefully about packing in my job, I never would have done it.  But I didn’t think. I just did it. Turns out to be one of the best things I’ve ever done. And will continue to be. Until I run out of money. 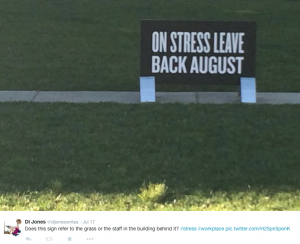 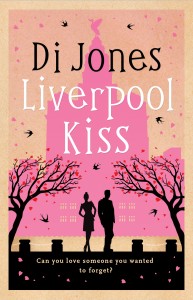 5.  Gardening. See number 3 giving up work. This year I’ve had time to smell the roses.  One of my favourite things this year has been picking the crop of Christmas plums, from my mini orchard of nine heritage plum trees.  I had been planning to fell them to put in a swimming pool.  Thank goodness I gave up my job and am running out of money.  The plum trees are now safe forever. 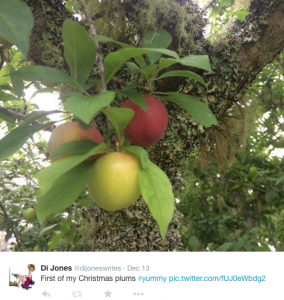 6.  Generosity of friends and neighbours. At my Christmas party for the Auckland City Mission Children’s Appeal, guests donated sixty five gifts for Auckland kids. You generous folk know who you are – a huge thank you.  Below Dolce and Gabbana are guarding the presents. 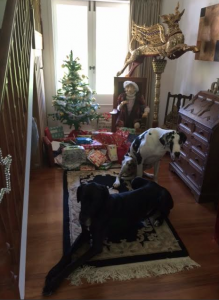 7.  Spending time with family at the beach – a post Christmas activity, and one of the highlights of my year, every year (and the reason this New Year’s blog post is several days late).  Martin’s Bay, on the Mahurangi Peninsula, is just 40 minutes from my home in Auckland. Isn’t it beautiful?  My family is even more so. 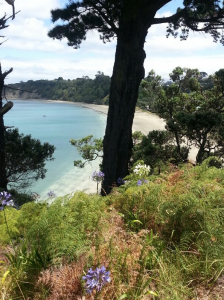 8.  A great year for music.  So much has been written about the best music this year, I have nothing to add except a link to this great recap.  My personal favourites this year have to be Sam Smith’s ‘Stay With Me’ and ‘I’m Not the Only One’ (my very favourite), Pharrell Willliams ‘Happy’, ‘Royals’ by our own Kiwi Lorde, and ‘Thinking Out Loud’ by Ed Sheeran.  I’m also hellishly shocked by how much I like ‘Shake It Off’ by Taylor Swift. I just don’t admit it though. 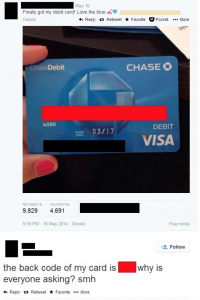 1.  Office politics and bullying. In 2014 too many people I know were affected by it, and most of them were unable to do anything about it.

3.  The Kardashians.  Does this need any further explanation?

4.  Sports announcers who talk about ‘we’ when their local team wins a game. If their team loses, they talk about ‘them’.

5.  Inconsiderate drivers.  There seems to be more and more of them around.  A friend of mine, who doesn’t drive, and has never been to India, reliably informs me there are more there, than in Auckland. I don’t care. The ones in Auckland annoy me more.

1.  Get that tattoo I’ve been talking about for years.

2.  Increase my gin intake (might help with the pain re the tattoo).

3.  Read more (get off the Internet, and social media in particular).

4.  Write more (get off the Internet, and social media in particular).

5.  Go to bed earlier, so I can get up fresh and read and write more.

5.  Stop swearing so fucking much.

4.  At Christmas, think of others less fortunate than you, and do something about it. Volunteer or donate.  Or both.

6.  Every day, do something, however small, that takes you closer to what you want to do, and who you want to be.

7.   Try to broaden your tastes, whether it be in food, music, or books.

8.  Forgive people.  It doesn’t mean you condone what they do, it means that you can move on.

10. Laugh until your sides ache.  If you can’t find anything to laugh about, read the Darwin Awards. Not only are they funny, they’ll make you feel smart.

11.  Finally, if you don’t find the Darwin Awards funny, develop a SOH.