The Laughter Dies – A Tribute To Joan Rivers

In 2013, the acid-tongued comedienne Joan Rivers pledged to work “forever”.  Her promise was to come sadly true – this morning the world woke up to the news Rivers had died, just a week after being admitted to hospital for routine throat surgery.   Her death, just a few weeks after Robin Williams, comes as a sad blow for the world of comedy, and brings a sense of nostalgia to those who grew up with her on the telly. 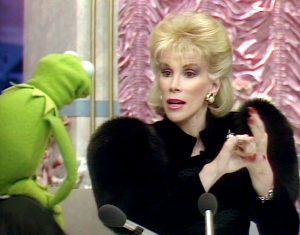 At age 81, Rivers was still shocking the world with her no-holds barred comments. At the Emmy’s she commented on Taryn Manning’s dress:

“Check the hem. The dress is just like Jackie Chan’s penis. It needs two more inches.”

But Rivers knew that her wit had a price. She once said:

“But you do have to learn, if you want to be a satirist, you can’t be part of the party. Meaning, you can’t go horseback riding with Jackie O in Central Park if you’re going to make a joke about her that night.”

As well as all the laughs, Joan faced her share of adversity.  There was the well-publicised fallout with Johnny Carson after her show went head to head with The Tonight Show, then there was the public humiliation when her show was canned, and finally, the suicide of her husband Edgar three months afterwards.

She once quipped about herself:

“I’ve learned: When you get older, who cares? I don’t mince words, I don’t hold back. What are you gonna do to me? Fire me? It’s been done. Threaten to commit suicide? Done. Take away my show? Done! Not invite to me to the Vanity Fair party? I’ve never been invited!”

One of the things we all loved about Joan was the way she made fun of herself even through the hard times.  Although she didn’t work for some time after Edgar’s death, because, as she said, no one wants to listen to a comedienne whose husband has just killed himself, she famously said later:

“My husband wanted to be cremated. I told him I’d scatter his ashes at Neiman Marcus – that way, I’d visit him every day.”

As the tributes pour in, I’m reflecting on the things I loved about Joan Rivers.  I love the way she was screamingly, cruelly funny, and that she was ahead of her time, paving the way for a generation of female comediennes after her.  I love the way she knew who she was and never made excuses for it.  She never forgot where she came from and only this year had 6M tattooed on the inside of her arm, in remembrance of the six millions victims of Auschwitz.

She also never forgot who had helped her get ahead, still crediting Johnny Carson despite the fallout with him years before.  She told the truth – even if it hurt.  And she was a tireless worker with a punishing schedule who always found time for her fans and for charity, recently doing the Ice Bucket Challenge.

I also love that she was passionate about dogs, and rescue dogs in particular.  It was rare for her not to have  one of her beloved pets by her side. According to press reports, Mt Sinai Hospital even let her dogs in to “kiss Mommy” before she died.  In an interview with Chicago Now, Joan said:

“Dogs are easier to love than people; they’re certainly more dependable. Once they love you, that’s it. A true friend in life is a dog.”

When it came to her own funeral, Rivers said:

“When I die, I want my funeral to be a huge showbiz affair with lights, cameras, action…I want Craft services, I want paparazzi and I want publicists making a scene! I want it to be Hollywood all the way. I don’t want some rabbi rambling on; I want Meryl Streep crying, in five different accents. I don’t want a eulogy; I want Bobby Vinton to pick up my head and sing “Mr. Lonely.” I want to look gorgeous, better dead than I do alive. I want to be buried in a Valentino gown and I want Harry Winston to make me a toe tag. And I want a wind machine so that even in the casket my hair is blowing just like Beyonce.” 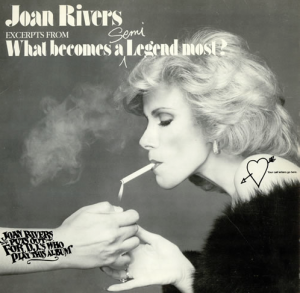