It’s Christmas Eve, and I’m spending it with family. Everything’s done – food is ready, presents are wrapped and under the tree, and I have a gin and tonic in hand.  Only one thing I’ve forgotten – to send those pesky Christmas cards.

I thought I was organized this year. After all, I gave up my full-time job back in July, so it’s not as if I haven’t had plenty of time to organize things. But the months have slid away – pleasantly and fast – and all of a sudden it’s December and the rush is on.

You might think the month of December is enough time to get everything done, and it is, but that’s without the twelve days pre-Christmas, which this year really got in the way. Here’s the countdown, in reverse chronological order.

On day twelve I was writing my latest novel way too late at night. Eyestrain and procrastination kick in, so I hop onto TradeMe, the New Zealand equivalent of eBay. Before I know it, I’ve bought a set of antique and replica decoys. Forty one of them to be precise. I have nowhere to keep them, so I put a set of shelves on my Christmas list, and hope Santa is listening. I suspect he isn’t.

Days eleven and ten passed nicely, and I manage to get most of my Christmas shopping done. The rest of Auckland is like me, trying to get it done early, and it’s a nightmare. I go home and decide shopping in the provincial centers might be more sane.

Day nine is taken up with planning a South Island road trip, to collect my decoys, shop out of Auckland, and catch up with friends I haven’t seen for awhile.  My lovely sister, my usual partner-in-crime, is keen, so I trawl the web in my writing time, looking for cheap rental cars.

Day eight we fly down to Queenstown and arrive at nine in the morning to pick up a Jucy relocation rental car. At a dollar a day, and including a free tank of gas and the South to North Island ferry crossing, it has to be the best value in the whole of New Zealand. After a catch up with friends who’ve moved to Queenstown, we drive to Wanaka, to pick up the decoys. Then a quick stop in Oamaru, the steampunk capital of New Zealand, and on to Timaru, where we spend the night.

Day seven we drive to Blenheim and spend that night, and the whole of day six there. We stay at the divine Marlborough Bed and Breakfast, where our hosts the Kirks spoil us rotten. They spoil us so badly that I do my bit to boost the Blenheim economy, and in true Christmas spirit, after buying everything else I can think of, I try to buy a church.  I figure I can rent my house out, move to Blenheim for a year, renovate the church, and write a book about the experience. It was a fun concept for a day or two, until I considered the practicalities of moving into a rundown church with my two Great Danes, two kittens, and without my family nearby.

Day five we leave the Kirk’s good Southern hospitality and drive to Palmerston North, where we do a spot of late night Xmas shopping. Then the dark drive to Turangi, on the way to which we imagine we are the victims of a road rage truckie who revs his engine behind us, in a bid to make us go faster. Tricky – the fog has closed in and the drive treacherous. We arrive past one in the morning, and rather than sensibly going to sleep, entertain each other with childlike stories of murders, kidnappings, and other adult versions of the children’s campfire horror tales. We awake the next morning exhausted, for the drive back to Auckland, and a stop on the way for me to look at a boxer puppy. Fortunately the puppy has been sold, as my brood is big enough already.

Day four is the party for the Auckland City Mission Children’s appeal. I host a Christmas party most years, and ask my guests to each bring a present for a child under age eighteen. It constantly surprises me that in a city as seemingly affluent as Auckland, there is in fact real poverty, and I’m heartened that my friends and neighbours are so generous, and we end up donating presents for sixty five young people. Below is a picture of my Great Danes, Dolce and Gabbana, guarding the presents. 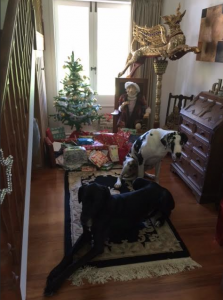 Day three is the after party and road trip recovery, followed by another spot of Christmas shopping. Then a late night visit to take the kids to Franklin Road, Auckland’s answer to any American street, resplendent with lights and carolers.

And today – Day Two and Christmas Eve – the final preparations. All done, except I forgot the Christmas cards.

As I finish this blog, it’s midnight, so this may well be the first blog of Christmas day. I look out the window, through the small orchard of plum trees, which will be ready for eating after Christmas dinner. Between the trees is a man. I think he’s playing with my Great Danes Dolce and Gabbana, until I realize the Danes have antlers.  I guess it must be Santa, doing the first delivery in the Southern Hemisphere, before heading back up North.

I wonder – if I asked nicely – if he’d deliver some last minute cards for me?

In case he says no, please take this blog as my personal message to wish you and your loved ones a safe and happy holiday!